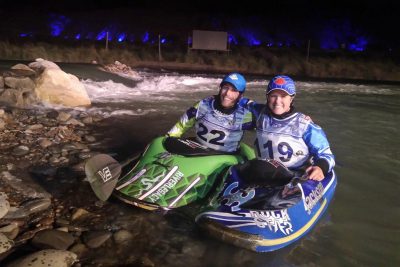 I’ve barely had chance to reflect on the recent World Championships; It’s been a full-on year for the ASP programme. As this training/competition cycle comes to an end, and on the back of the World Freestyle Championships in Argentina we would like to congratulate all our ASP athletes.

Last year the ASP programme set out with a desired goal for our female athletes – to increase not just the depth of competition in ladies freestyle, but to raise the bar of performance in competitive ladies freestyle. We set out an ambitious target of breaking the 1000 point barrier (under the ICF scoring system). I’ve known for many years that ladies have the potential to perform any move on the score sheet, so our aim was to realise this in competition.

As always the ladies rose to the challenge and showed true dedication to meeting these goals. I would like to give a special mention to Claire O’hara (GB), who has not only achieved the goal of being able to perform all the ICF moves (including trophies), but pushed forward with a ride that set a new record scoring 925 points (one move short of breaking the 1000 goal) – opening her final ride with Luna’s and incorporating Tricky’s. I would also like to give a mention to Islay Crosbie (GB), who’s only been on the programme one year, and is balancing paddling and a new career as a Doctor. Finishing 5th in the world championships, she is currently only one move short of achieving all the ICF basic scoring moves in training – inspirational! Ottilie Robinson-Shaw, just 16, won the junior Gold, showing both her drive and impressive repertoire of skills, including difficult trophies such as Back Loop-Mc Nasty in training sessions.

There are many more athletes on the programme that I’m proud to be working with and looking forward to discovering what’s possible in 2018 including Heidi Walsh (GB) and Anna Bruno (USA) – both competing in their first World Championships for K1 Women. Anna also won Bronze in the Ladies Squirt.

As always we have continued to focus on developing well rounded athletes who are not only highly technically skilled, but mindfully skilled to deal with the demands of training and competition at such a high standard. I can’t stress enough how far the performance bar as raised over more recent years.

In the mens competition, Robert Crowe (now in the second year of the ASP programme) did GB proud making the final and demonstrating what it takes to be a World Champion; although just missing the podium he achieved the third overall highest scoring ride in the K1 heats. Real Gav Barker (GB) in his first year of the ASP programme just missed the cut for the finals finishing 6th overall. Both have proven capable of breaking the 2000 point rides in training and made their mark at this Worlds. Harry Price (GB) also pushed forwards with a personal best of 1216 to gain the Bronze in the Junior Men’s. I’m stoked to have been working with Harry and it’s exciting to see his potential.

It’s great to see James Ibbotson (GB) show casing C1 freestyle both home and abroad. James is making great progress finishing 8th overall and really building a repertoire of moves with a 723 World Championship personal best. I know James is already adding new skills to his training rides and I can’t wait to see him throw down in 2018. Max Karlsson (SWE) decided to take a step back from competing in the freestyle World Championship to focus on the Slalom National Team. A difficult decision, I wish him well and we are excited to be continuing to support him in his aspirations.

I would like to congratulate all the ASP athletes in their hard work preparing, and competing in this World Championship, it’s always a privilege to support the athletes and I look forward to the year ahead.