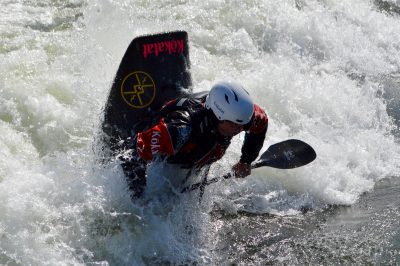 Ever had a stubborn incorrect technique that you’ve struggled to address? Whilst we may understand what needs to be done technically to successfully achieve the skill, we often struggle to successfully adapt our technique. To remove these ingrained bad habits we often need to adopt a more mindful approach to training practices.

Unwanted habits in technique often develop due to every day experiences; lack of diversity of river features, misconceptions of the correct technique, physical imbalances or protective responses following an injury. In short it’s difficult to avoid unwanted habits sneaking into your technique. Over time these experiences become well learned, automated and instinctive, and can slow down or even prevent learning new more desirable techniques and skills. These unwanted habits are not always noticeable to the performer as they frequently compensate physically to maintain their level of performance. This is often short lived and eventually the overall performance level plateaus or may even decrease.

Although an experienced athlete may know the technical errors, their performance is often automated and very cue dependent (in response to internal and external stimuli) and they revert to prior behaviour patterns. This is largely because of a mechanism called Habit Pattern Interference (aka Proactive Inhibition). This mechanism is involuntary and helps prevent the association of conflicting ideas by protecting all prior knowledge. Unfortunately this doesn’t discriminate between the existing and improved technique during a performance, thus resisting technical adjustments and sometimes becoming a major obstacle to learning. In essence, it’s what the athlete already knows, not what they don’t know that’s limiting their progress.

As the existing technique is already automated, the coach needs to assist the athlete in developing a kinaesthetic awareness of the existing (unwanted) technique, instead of trying to modify the existing learned pattern of movement. This involves a training method that alternates between performing a skill using the unwanted technique, followed by the desired technique. This approach enables the athlete to better discriminate between the existing and future state, and shortens the adaptation period.

It’s important to note that this process may also be used to change positive habits in technique, as the athlete may be looking to adapt to suit a new demand (e.g., completing a move on a larger wave versus a smaller wave). Because of this, I would always ask what this change means to the athlete and adopt their own words to describe what their existing and adapted future technique means to them. For the purpose of simplicity I’m going to refer to the two contrasting adjustments as existing habits (or unwanted) and future state (or desired) habits.

The process starts with a performance analysis to identify the unwanted habits within the technique. Establish what’s going on. What should they be doing instead? What are the differences? It’s also worth considering advice from sports physiotherapists, strength and conditioning coaches and other specialist where necessary. After gathering this information, it’s vital that you ask the athlete to comment on the analysis findings and get them to describe the problem in their own words and motions. During this process it’s important to consider that a “technical error” can be a physical error and/or a misconception or faulty mental model of the skill. In some situations, correcting the misconception is enough to also correct the associated performance error. In other situations, both the performance and its underlying misconception have to be corrected. Also bear in mind that some athletes may not have the physical capability or lack the readiness to adopt the “ideal” technique, so smaller progressive steps to improvements in technique can be made over several sessions.
At the end of this phase it’s vital that the athlete is motivated towards change, and clearly understands what it will involve, and mutually agrees with the aims and objectives of the training.

Part 1 – Errors are acknowledged and practiced

The first step is to make the unconscious process conscious again. Initially this involves performing a skill the “unwanted” way, whilst interjecting land based rehearsals to reflect on the feelings and sensations to develop a physical awareness of their current errors in technique.

Success would be a high consistency of the same errors in technique during performances and an ability to replicate these movements during land base rehearsals. Its important to get the athlete to verbally express body sensations and any internal/external cues (e.g. internal cues like what they are feeling, and external cues such as what they are seeing) they deem important.
It’s important for this session and the sessions that follow, that there are adequate breaks between rides/runs to minimise poor performance due to fatigue.

The desired technical model is now introduced alternating between existing (unwanted) and future (desired) techniques. Initially this should use land based rehearsals (and/or flat water drills if necessary). A new range of cues can now be established that don’t replicate the existing ones from the unwanted technique (e.g. performing an air screw looking downstream (unwanted way) during the take off, instead the athlete may look at the back hand (desired way), or taking-off on the second bounce (unwanted way), instead the athlete may use the first bounce (desired way).
Although for some athletes the two adaptions maybe be applied alternately relatively early in the session, most athletes respond better alternating between blocks of 2-3 attempts. This should be applied in a flexible manner optimising the value of comparisons. Whilst the coach initially guides the athlete through the process, it’s vital that the athlete owns the process. Typically the athletes performance level will decrease during this phase, so it’s important to ensure that motivation does not drop through the use of process-oriented goals pertaining to the technique modifications.

Phase 3: Adjustment – Internalising the desired adjustments, and being able to execute with greater accuracy and consistency.

The focus now shifts towards practicing the desired state. Although athletes often like to compare the unwanted and desired technique, a greater proportion of reps is now devoted to the desired state, as the unwanted technique is faded out.
The coach continues to empower the athlete to acknowledge the differences, but not dwell on them. Think of this process as tagging the differences – guiding them towards the process of acknowledging the differences, and where necessary parking their thoughts with the coach. The athlete can then explore these differences with the coach periodically during the session. Continue to guide the athlete towards ways of verbally expressing their sensations of the desired state. Throughout the session use video feedback to show their best current performances, whilst using mental rehearsal (kinaesthetic imagery) to enhance the internal/external feedback process.

By this stage the athlete will have a good grip of the desired technique, and feel comfortable with this approach to performing the skill. Although under pressure they are liable to default back to the unwanted technique or be tempted to think too much about specific technical, tactical elements instead of executing the whole movement in a holistic more fluid way.
The coach now layers holistic, rhythm-based sources of information into mental imagery activities. Decrease the use of part-skill cue words established in the previous phases, as continued use of these types of cue often disrupt the flow and timing of the entire skill. The coach’s focus now turns to developing a more effective holistic focus (e.g. smooth, fluid, light, explosive etc) to help the athlete remember the more overall feel and rhythm of the whole skill and not its individual parts. These must be meaningful to the athlete (and reinforced by the coach) providing a continuity of information that facilitates flow and timing of the entire skill. The generation, experimentation, and selection of these holistic cues may be guided during discussion and video reviews of successful executions of the skill. This will assist the athlete in finding the right balance between too few and too many cues during their ride/run. It is common for there to be undulation in the athletes performance levels during the early part of this phase.

The coach now uses a variety of short pre-session activities that assists the athlete in creating and internalising a movement time line for the skill (that suits the demands of the environment in which it is to be used) through mental rehearsal using pre-ride routine activities. Its important to vary the features used. Video feedback is used sparingly during sessions allowing the athlete to self-check their own performance, with the coach when needed. Decreasing the amount of video feedback assists the athlete in internalising the desired adjustments, trusting their senses and gaining confidence in their own decisions.

The last stage is about building the athletes confidence and trust in their desired approach under varied environmental demands. Promoting the letting go of conscious control, and proving to themselves that their desired way works (or expose that it doesn’t) on autopilot.
The athlete now works towards flawless performance in more challenging situations. This can be achieved through simulations, and real competitions with low-stakes (but high-pressure) using carefully selected venues/events for a sense of whether they are achieving a desired flow-like state, or if there is still more work to be done.
The athlete continues to self evaluate their technique with guidance where required by the coach. It’s important to monitor performance over the season, with periodic video reviews of performances, and remote support via email and Skype.
The athlete should also aim to use imagery 3-4 times a day that focuses on reinforcing the desired cues and self-belief. In order to establish a strong self-belief the coach typically uses an evidence-based approach that allows the athlete to create strong, believable, positive self-statements, which they can use during various stages of their ride. This evidence may come from quality experiences during dry-land, in-water training, and current or past competition performances.

Thanks to Robert Crowe (Paddler) and Bruce Jolliffe (Cameraman)

We are stoked to announce applications for the ASP programme are now open. This is a long running highly successful athlete development programme (4 year cycle) with athlete positions funded by Sweetwater Coaching. The programmes Read more…