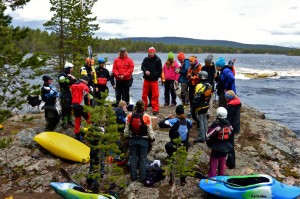 I’ve just returned from a Finnish team freestyle camp in Lapland. That far north means endless daylight and awesome waves. In traditional Lapland fashion we had a mix of sun, rain and a little snow – providing an ever changing mood to the landscape. The air temperature was mild at around 14 degrees, and the water, well, as fresh as always.

I’ve worked with the Finnish freestyle team before, but this time the World Championship is going to be a wave event, which is why after flying into Oulu we hit the road for a 5 hour drive north for the annual ‘week of waves’ gathering and Finnish team selection event. The Finns have some great wave boating talent, and it was a pleasure to be invited once again to coach them and help them prepare for their selections and ultimately the World Championships.

We had high flows, almost too high for some of the features, which made them too unpredictable to throw rides comparative to those expected at Worlds. We set up camp near Kelokurkkio, where there are two great waves within a short distance of each other. ‘Engineer Wave’ was a steep glassy wave with a small pile, perfect for developing techniques and new moves. The second wave called ‘Outback-wave’ (named because of its location – right at the back of the main rapid and involving a walk back) was a larger faster and more surging wave, which demanded quick reactions and proactive paddling. Both of these waves allowed you to throw any move on the score sheet – a perfect choice.

Selections was seniors men/ladies only with 4 rides best 2 count, followed by a final 3 rides best 1 counts. The athletes had to reach a minimum score criteria over the two days. On the day the athletes were fired up and ready to throw down and secure their position on the team. It was a great selection with a mix of exciting variety of rides and different strategies some going for high risk technical moves (like blunt-pistol’s) and others maximising on quick transitions between safer moves to rack up their scores. Once selections was over the athletes could relax and enjoy the final two days of the week of waves.