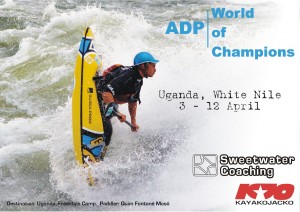 KJO ‘World of Champions’ and Sweetwater Coaching ‘ADP’ (Athlete Development Programme) are excited to be teaming up once again to provide one of the most progressive freestyle training experiences in the world.  The 2014 camp was a huge success, with a combination of great waves and athletes who embraced the ethos of the programme – which promotes curiosity and explores the difference that makes the difference. Once again the programme will be based on the White Nile in Uganda on the 3 – 12 April 2015.

About World of Champions & ADP

Here is an experience that’s all about top freestyle paddler’s moving their paddling on to another level and fulfilling potential. It takes your paddling on a journey that looks at Technical, Physical, Psychological and Tactical skill and adds depth of knowledge and new capability. It’s called “The World of Champions – ADP” because it looks at the difference that makes the difference and offers those who are open and willing, an insight into what they need to do to enter the world of the modern athlete in pursuit of glory.

The approach for the 10 days is all about finding then recognising these insights and grabbing hold of, and using the ones that work for you. We help you find the direction that allows you to, think like a champion, act like a champion, speak like a champion and ultimately become a champion. That means 10 days of total immersion into your freestyle where you’ll work hard on and off the water.

Continued performance analysis will provide you with objective information to help enhance the effectiveness of the coaching process. This will accelerate your learning and through timed interventions lead to the greatest performance improvements. This process is underpinned by systematic observation, which provides valid, reliable and detailed information relating to your performance.

About Jacko; over his 30 years coaching career Jacko has competed for GB, worked with National Teams and many World Champions. He is a National Trainer for the British Canoe Union, Level 5 Coach in canoe and kayak and a NLP Master Practitioner. Particular specialities he brings to the camp are around performance thinking, learning strategies, goal setting, anxiety management and analysis criteria’s.

About Dennis; Dennis has worked with National Freestyle teams and many world champions. He’s currently the performance director for the GB freestyle team. He is a National Trainer for the British Canoe Union, a Level 5 Coach and holds a BSC Hon’s in Sports and Exercise Science. Particular specialities he brings to the camp include performance analysis, strength and conditioning, self-regulated learning strategies and technical and tactical thinking.

Drawing on their expertise and the latest coaching and thinking we get a camp that is versatile enough to facilitate individual learning needs whilst still maintaining group direction.

The White Nile is widely regarded as one of the best playboating rivers in the world.  It is home to some of the world’s premier play waves; the ‘Nile Special’ and ‘Club’, these are right on our camps doorstep, just a short paddle away. Club Wave is at its prime in the mornings whilst the ‘Nile Special’ comes in, in the afternoon. The river run also provides outstanding rapids for all levels of ability and we occasionally take days out to run down from ‘Super Hole’ (a super friendly hole wave) via Kalagala or Itanda depending on the group’s energy levels. This allows us to capitalise on the excellent play waves such as Mutt’s Nuts, Virgin and Kulu Shaker as we make our way back down to Nile Special and our camp.

We are inviting people who are either on or close to national team level to attend this camp. People with big goals (goal setting will be a pre requisite to this camp), who are prepared to step over the threshold and become the best in their sport. If you’re unsure call Jacko or Dennis.