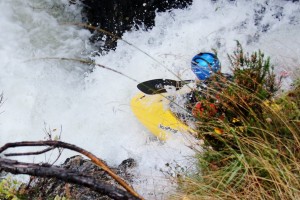 Playboater have been supplying equipment to kayakers (from beginners to world class paddlers) since the late 80’s. Set up by Shaun Baker and Nick Mallabar, Playboater boasts a history of bomber decks. In the early days it was about creating decks that they could trust whilst running first descents around the world, including some of the largest falls in Iceland and the Alps. It’s not just been about river running either, by 2000, Shaun had also gone on to win the UK National Championships in Whitewater Freestyle 9 times and taken 1st place in numerous international freestyle competitions.

Their ethos is as strong now as it was then…as they continue to develop decks that meet the environmental and performance demands of river running and freestyle enthusiasts. 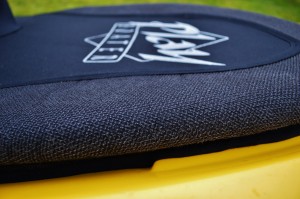 For years I have paddled with the Pro Team Deck and have been impressed by its bomb proof performance and durability. My professional role as both guide and coach pushes kit beyond the normal wear and tear of personal paddling, it’s not just the whitewater environment that tests my Pro Team Deck, it’s also negotiating the banks and undergrowth to provide safety cover or for filming and other coaching activities.

The Pro Team Deck has undergone continuous development and features a 3/4 dry lip that is easier to put on at the back and its low profile avoids water channelling under the cockpit. The tough Kevlar edge is kept in place by the sticky Latex coating inside. I had used this for both river running and freestyle and it’s served me well and seen me through the great times and beat downs. But now there’s a new addition to the Play boater range. 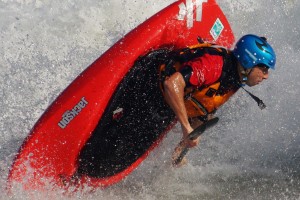 The Hard Work Deck, has been recently released after intensive testing by the Pro-Team. The Hard Work Deck is designed around modern paddling, with a central super-stretch section which reduces edge lift for a drier more secure ride and better accommodates an over-thruster. The new Carbon edging is an industry first, and offers significant performance gains over conventional Aramid fibres. Although involved in the early testing, I decided what better place to review its performance than on my recent trip to Uganda.

I found the new Hard Work Deck to be a good, stylish looking spray-deck. It had a comfortable fit and was easy to put on, especially with the over-thruster. The Hard Work Deck provided a good seal and was bomb-proof when taking those inevitable big wave hits – knowing your decks not going to pop frees the mind for where it counts. 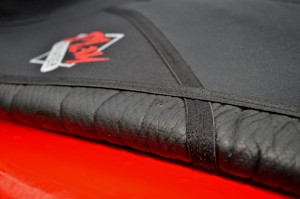 If you would like further information on the Playboater product range please visit the System X website;  www.systemxeurope.com