GB Kayaking superstar Claire O’Hara dominates the ladies classes and wins two gold medals at the 2013 ICF World Freestyle Kayaking Championships. Claire went into the World Championships as the defending World Champion in not just one, but two disciplines. Doubling the double Claire not only defended her squirt boating world title for the third time but also defended her freestyle kayak world title to bring her World Gold medal count to 5, in a spectacular display of athleticism and skill. In nail biting finals Claire took her World title to become the most successful female freestyle kayaker in history.

The 2013 ICF World Championships saw over 200 athletes, from 26 countries, come to the Nantahala Gorge in North Carolina, USA, to compete in the pinnacle event of the sport. This biannual event brings the best of the best together to compete for the World Championship Gold Medal. Of the 8 Gold medals given out at this year’s event the host country, USA, took all except for the two defended by the UK’s O’Hara.

Claire dominated the squirt boating throughout the event setting the highest score of the event 1,257 points (M&W), during the semi finals round. In the end Clay Wright (USA) took back the high score during the finals with a huge 1,300 point ride but Claire not far behind took the Womens title with double the score of the closet competitor Motoko Ishida (JPN).

In the women’s freestyle it was a much closer battle in the final round with Hitomi (JPN) laying down an awesome 1st ride. There was only 1 person in the running who could beat Hitomi’s 650 point score and that was Claire who had led the rest of the rounds already, setting a new ICF World record with an 810 point ride during the prelims. It wasn’t until the last ride of the event that Claire managed to pull it out of the bag again with a huge 708 point ride putting her back to the top of the podium. Her 5thWorld title! Doubling the Double! Retaining her 2 world titles in 1 day! 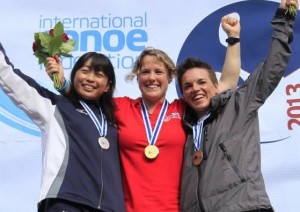 This is the first time any athlete has doubled the double and Claire is one of only 2 athletes to have won 5 ICF Freestyle World Championship gold medals. The second is Dane Jackson (USA), who won his 5th World title winning the men’s K1 event on Sunday.

Claire, 31, from Meanwood, Leeds, is currently a predominately self-funded athlete and works as a freelance outdoor instructor which helps enable her to train and be on the road. She spends most of the year travelling and training on some of the worlds best features allowing her to stay at the top of the game. Claire has the support of a number of individuals and organisations which help her compete and train to such high level. Claire would like to say a special thank you to Dennis Newton at Sweetwater Coaching, Teva, Jackson Kayaks, Peak UK and all her sponsors for all their help and support in getting her to this event.

Claire is currently looking for financial sponsorship to help her continue to train and compete so she can continue to be the top female Freestyle Kayaker in the world. If you can help her in any way please get in touch.