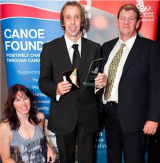 Congratulations to Dennis Newton with the Canoe England Performance Coach of the Year Award. The award was in recognition of his work in Freestyle Paddlesport with national athletes and grass roots participation.

The sixth annual volunteer and recognition awards took place on October 27th at Eastwood Hall, Nottingham. The dinner provided an opportunity to recognise all the hard work by the many thousands of paddlesport coaches across the country that have made it possible for so many people to participate in our sport, making it the most popular watersport in the UK. There were 160 guests in attendance with special guests Etienne Stott, David Florence and Liam Heath in attendance. The three Olympic medallists were also joined by Paracanoe champions Jeanette Chippington and Patrick Mahoney.