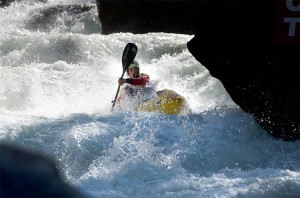 The 24 year old from New Zealand showed clearly that for a third time in a row he is the fastest extreme kayaker in the world.  Sam Sutton again defended his title with a winning time of 56.92 seconds, which was short of his 2011 course record (55.84), but was fast enough to secure the gold medal in front of the Slovenia’s Dejan Kralj with a time of 57.81 seconds and Mike Dawson (NZL) time of 58.38 seconds.

This was the fifth anniversary of the Adidas Sickline Extreme Kayak World Championship in the Tyrolean Ötztal. For more news and event information click here -> Adidas Sickline.