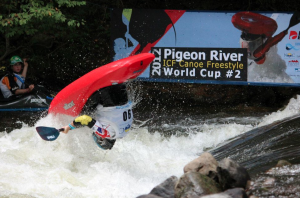 Over the last 3 weeks the USA has seen over 120 of the top freestyle kayakers from around the world come together to take part in the 2012 World Cup series.

The freestyle kayaking World Cup series takes place every two years and is made up of 3 competitions with the top ranking paddler from all 3 individual events taking the overall win. This years events are all taking place in America and the finals will be happening from the 7th – 9th September at the Nantahala Outdoor Centre (NOC) in North Carolina.

This is the not the only major international freestyle event that will be heading to North Carolina as next year the NOC will also be hosting the World Freestyle Kayaking Championships (6th – 9th September 2013).

The first competition took place in Rock Island at a great wave-hole situated beneath an awesome waterfall in the depth of Tennessee. The local paddlers really showed form at this event, throwing a great mix of wave and hole moves. With very little training time available before the event kicked off it was great to see paddlers developing and improve during the course of the event. Emily Jackson (USA), Jordan Poffenburger (USA), Hunter Katich (USA), Nuria Fontane Maso (SPN) and Dane Jackson (USA), all paddled well to take the win but it was Slovakias Peter Csonka who stole the show with some huge moves to take 1st place in the Mens.

The squirt boating took place in a great mystery seam at the outflow of the powerhouse. Claire O’Hara (GBR) took the ladies win just ahead of Motoko Isihda (JPN) in the ladies. In the mens Clay Wright (USA) threw down a massive 21 second mystery followed by an awesome display of flat water to take the mens win with a huge 1,500+ point ride!

The town of Rock Island all came together to support and host this great first event. Making all the competitors feel welcome at this very enjoyable and memorable event.

Next stop on the tour was Pigeon Hole again in Tennessee. This awesome freestyle feature has been built by hand by the local raft guides and is now one of the best freestyle features in the USA. Stable, deep, retentive, uniformed it is almost the perfect freestyle hole and allows all the main tricks to be performed. The quality of the feature really allowed paddlers to excel and express themselves at this event leading to some huge scoring rides and closely fought battles in all categories and rounds. The score to make the cut to mens finals, for example, was super high with all top 10 paddlers capable of throwing over 1,00 points. Add to this a sweet squirt boating seam 100 m downstream and this was a brilliant arena for a World Cup event.

Again the whole community got involved in supporting the event. With local children giving out the medals to the athletes and raising the flags celebrating their achievements and signifying the end of the 2nd 2012 World Cup event.

This weekend all the action will be moving to North Carolina for the 2012 World Cup finals. The competitors are currently trainig at the Nantahala Outdoor Centre ready to battle it out for last time in a bid to secure the points they need to take home the World Cup titles. There will be current and former World, European and National Champions from across the World battling it out everyday.

If you are in the area come along and watch the action or you can catch it live online on livestream tv at www.jacksonkayak.com/team-jk/worldcup2012/world-cup-live-stream

For more information about the event check out the 2012 World Cup and 2013 World Championship website www.freestylekayaking2013.com

More information, pictures and videos can also be found on the following websites…