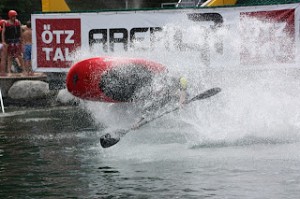 As part of our Europe tour we were invited to test out the new kayak ramp at Area 47, an ultimate adventure and extreme sports centre in the heart of Austria. Area 47 has been a base for people to come and take part in many extreme  and adventure sports for the last few years and now hosts a 45 foot high, custom built, kayak ramp amidst its impressive water park.

The new ramp allows you to run out level onto the water, instead of the traditional configuration that launches you straight of an 8 foot+ high kicker.  This allowed us to fly off the kayak ramp and create our own bounce, as on a natural wave. Transferring the energy from the ramp, all 35mph+ of it, into a bounce to launch the boat into spectacular air moves.

We spent a couple of  days playing on the ramp between paddling  rivers in the area.  The trickiest part was trying to master the timing of the bounce and figure out its potential to perform various moves. I dialed it relatively quickly getting some massive air screws and pan-am’s in the first session. Claire took a little longer to get used to the timing, but was soon throwing huge air moves left and right, front and back.

The ramp configuration has great potential for urban river festivals in the UK and abroad, providing an exciting way to showcase freestyle moves to the general public, or even to provide workshops for  intermediate paddlers. Hopefully in the future we will see less traditional air ramps and more slides like this.

I would like to say a big thanks to Hans Neuner and the  Area 47 Team for so much fun, and a special thanks to Arnd Schaeftlein for letting us sofa surf at his house.