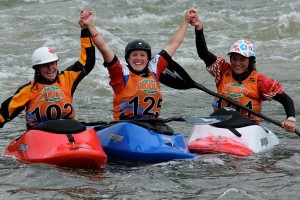 The 2011 ICF World Freestyle Kayaking Championships took place on the River Isar in Platling Germany with 222 athletes competing from 26 countries. Claire travelled out to the event in her specially logoed VW T5 Van and spent 9 weeks training on the river in Platting before the event. She beat former World Champion Emily Jackson from the USA and competitors from all around the world to win the Freestyle title and paddlers from Japan, USA, Germany and New Zealand to defend her World Championship Squirt Boating title. She won the squirt boating event with a massive score of 946.6 (366 points ahead of second place) which would have also placed her 3rd in the men’s event! In the qualifying round of the squirt boating event, Claire dominated throughout, qualifying for the finals in first place 1000 points clear of her closest rival in the ladies and 200 points clear of the men with the highest combined score of the event. 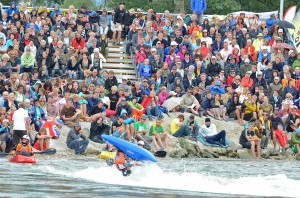 ‘These are our best ever results and we are very proud of all our athletes.  This is the just reward for all the hours they have all put in over the years.’ Tim Ward GB Freestyle Chairman.

‘This finals day was incredible. I had been training so hard for it and when it all came together in both events, to win the two Gold medals was amazing.’ Claire O’Hara

Claire is already back in the UK training as she is currently taking part in the 2011 British Championship series. Then she will be back out on the road to train for the European

Claire, 29, from Meanwood Leeds is currently a self-funded athlete and works for Notre Dame Catholic 6th Form College Leeds as a FE Sports Coordinator. She trains at Leeds Met University, the Village Hotel and Leisure Centre, Leeds, and at the National Water Sports Centre in Nottingham, as well as on rivers across the UK and all over the World. Claire has the support of a number of individuals and organisations which help her compete and train to such high level. Claire would like to say a special thank you to VW Van Centre West Yorkshire, Dennis Newton at Sweetwater Coaching and all her sponsors for all their help and support in getting her to this event.

Claire is currently looking for financial sponsorship to help her continue to train and compete so she can continue to be the top female Freestyle Kayaker in the world. If you can help her in any way please get in touch.

For more information on Claire and her success at the World Championships check out her website and blog at www.claireohara.co.uk or contact her direct on ohara_claire@hotmail.com and 07985 200550.