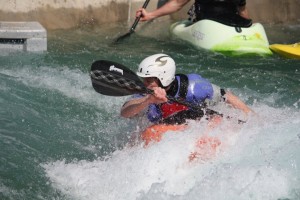 Very rarely, these days, do you get to paddle a completely new playspot. And if you do, so often you’ll have heard about the spot from your fellow paddlers; they’ll tell you about the holes, the waves, and the moves that you can stick in each one.  However, on those rare occasions when neither you, nor your paddling buddies, know anything about the new playspot before you arrive, there’s a real sense of excitement and adventure about the paddling you’re gonna do that day!

This was one of the reasons why it was so special to be asked to go and paddle the new olympic white water course at Lee Valley park. As I drove to the course with Tim and Alan Ward that morning, we speculated about the course: Would there be some chunky holes? What would the waves be like? Could we stick moves like pistol flips? What combos would we be working on?

The site, which has been built specially for the London 2012 games, is indeed very impressive! There are two separate courses on the site: the Olympic course; on which the slalom event will be run at the games and the Legacy course; which serves as a great secondary course and has some great features for freestyle. There is also a brand new centre with an amazing roof terrace from which you can see all the action.

It was great to hold a youth freestyle series event here.  One of the reasons why the olympic venues are so important to sport in the UK is that they should give our young athletes the opportunity to reach the top in the future. It was fantastic to see this happening right from the word go; with Britain’s top young freestyle paddlers being the first members of the general public to paddle the Olympic course. 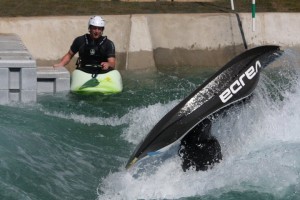 The day began with a coaching session, where we pushed all the athletes to get the hole wired ahead of the competition that afternoon. The site we were using was the main hole on the Legacy course. Sweetwater athletes James Weight and Bren Orton looked particularly strong as they threw down some impressive McNasty and Phonix moves. As the day progressed these began to be linked with other moves such as Blunts (to look a bit like a KY), Cartwheels and Loops.

The competition was, as always, great fun. The more experienced paddlers helped and encouraged the novices, which created a friendly and supportive atmosphere.  On top of this, everyone loved the novelty of the conveyor belts to transport you back up to the top of the course!

Special thanks go to Matt Chadder, along with Mike and Becky, for making the day run so smoothly, and to Lee Valley Park for letting us be the first to hit some awesome moves on this brand new, multi-million pound course. That’s something I can’t claim to be true every time I go paddling!