Can’t believe my luck this season. After an awesome time in Sweden with perfect water levels, I arrived in Canada, Ottawa to find that Ontario had just received a record amount of rainfall – in fact the most rainfall since records began. I was accompanied by Tom Wolstenholme (the Burners programme coordinator). The ‘Burners’ is a youth  programme  co-founded by Andrew Jackson (KJO) and myself. The programme has produced some of the UK’s finest youth freestylers over the years, although its main aim is youth development through the teaching of life skills and leadership. The programme is open to 13-17 year olds and develops both freestyle and river running skills whilst also offering the opportunity to gain BCU coaching and performance awards.

Our game plan was to spend a few days exploring the Ottawa (now running at 13 on the gauge) and allow the team to adjust to big volume paddling before heading over to the Gatineau River for some high tension action (usually only possible in the early season). Then over to the ‘Lachine’ wave in Montreal before heading back to Ottawa river for the final few days.

Coliseum was one of the Burners favourite sections of the Ottawa, partly because of the large volume rapid, but mostly because we had optimal flows for big wave action on Kauna and Mikeys wave. Check out Joe below getting to know Mikey’s. 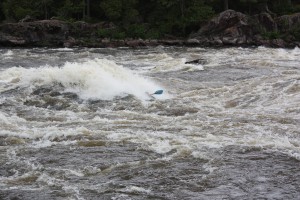 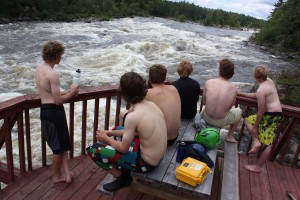 The Burners Team - Taking time out after a session on Coliseum

After an intense session at the Coliseum we headed up to the McCoy section the next day and spent the day ripping up the ‘Odyssey wave’ on the Initiation Rapid. This feature became another of the guy’s favourites, supporting any move you can think of. The guys described this feature as small but feisty as it changed character quickly at times, shifting from a wave to a retentive wave hole. This became our place to wind down in the evenings. 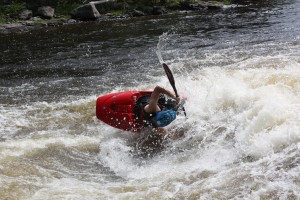 Me going for a back Pan-am 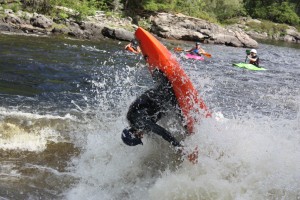 Joe getting some huge air during a front loop 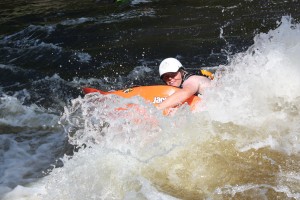 George taking time out to body surf his boat

Below McCoy Chute the Middle Channel cuts its way through a large group of islands through the remotest part of the Rocher-Fendu. The islands create a variety of options for every water level. The entrance rapids to the Middle Channel can be Lost Channel, Iron Ring or Little Trickle depending on water levels… The Middle Channel had some great rapids and play features, although at time the flat stretches can be a little tedious, great company and stuning scenery more than made up for these somewhat monotonous  sections. 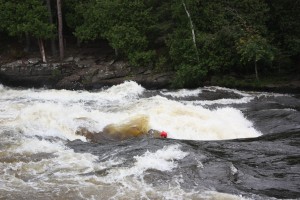 Adam taking on the first rapid of the middle channel

The Burners program also provides advanced white water skills, developing the neccessary knowledge of the enviroment and any safety considerations required not just to run rapids successfully but also develop a sound understanding of what is required to minimise the risk in doing so. 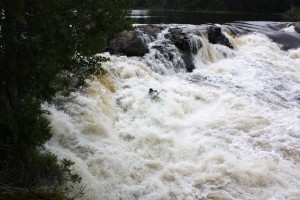 Next up is my favourite wave to date – High Tension on the Gatineau River. I mentioned earlier that the region had a record amount of rain fall, and we where more than excited when we heard High Tension was running. The wave has a 6ft high smooth and glassy face and eddie service – furthermore there’s a pile to land all your tricks, and if you do wash off you have an easy ferry back into a large eddy where it only take a minute to hop back over to the wave. 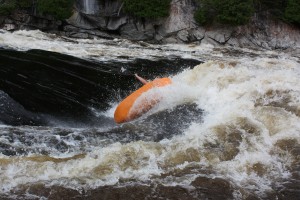 After spending a few days at High Tension we set off for Motreal to visit the ‘Lachine’ Wave. The Lachine Rapids are a series of rapids on the Saint Lawrence River, between the Island of Montreal and the south shore.. The Lachine Rapids contain large standing waves formed by shelf like drops in the river bed.  The water levels were a little on the high side for the Lachine Wave to be in its prime although we had a blast playing on it. There were a number of other great holes and waves that we explored. One thing I must say is prepare for a workout it you choose to visit Lachine, the eddy is of epic proportion involving pulling yourself over shallow reef ledges on a tow line and lots of paddling to make it back up to the platform area where you can ferry out to drop back onto the wave – it’s all worth it though! 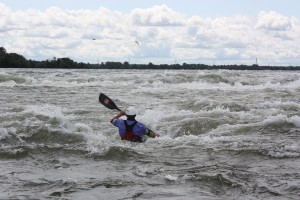 Tom Starting the long ferry for the Wave 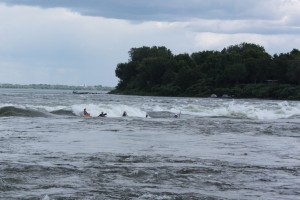 Tom unknowingly dropping into a unofficial king of the wave competition!

After a great day on the Lachine rapids we cruised back to spend our final days on the Ottawa. OK, there are loads of sections on the Ottawa and all of them offer excellent play potential depending on the water levels, but the all time favourite play feature voted by the Burners was the Butches Knife – Nice name I know! This is the first rapid you come to after Waikiki wave on the Main Channel and gets its name from the sharp quartz rocks that line the outside of the bend. Just off these rocks forms a large eddy with some huge swirlies. We must of racked up a hours worth of downtime here – it was impossible to ignore the lure of these fun but sometimes scary features.  We all got some full on down time, and from time to time 2 or even 3 of us would all get sucked down together. At certain flows you don’t want to be anywhere near these features but we checked them out first and noticed that they where imploding after about 20 seconds – although that’s still a long time. 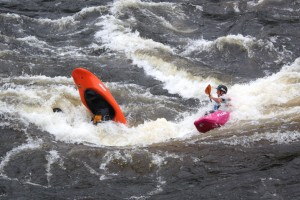 George and Todd go tag team unintentionally in a swirly 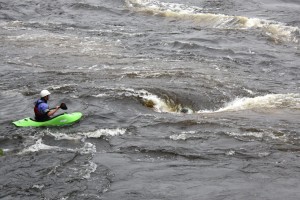 Tom giving Josh a few tips - count to 10, if you reach ten count some more!

Group photograph taken at the put-in for the Gatineau River, with Steve Fisher dropping in to say hi – he was spending some time at High Tension testing out the new Riot prototype! 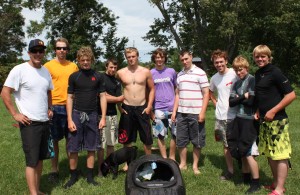 Group photo at the put-in for the Gatineau River

See you out there