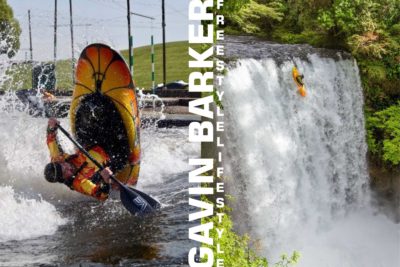 Gav is one of the most explosive freestylers out there, with his huge air ride style likely to induce aesthetic bliss in discerning freestyle fans. He has a passion for big white water, although for him this isn’t about competition “During the off-season I like to step away from the competition circuit. It’s all about  running great lines and throwing huge air tricks, with like-minded people, enjoying pushing each other to new levels of comfort” he says. This strategy seems to be working as Gav’s at the forefront of the UK freestyle movement, and has now truly found his game on the international scene.

His first international appearance was at the 2012 ECA European Championships, in Lienz, Austria. He looked on track after some strong results on the competition circuit; but two days before the event he tore ligaments in his chest. Although now, he’ll undoubtedly admit it was a bad call, he continued with the competition finishing in 32nd placing and ultimately extending his recovery.

Speaking afterwards Gav said, “At some point most athletes will have a setback due to injury. First thoughts are often around how long you’ll be off the water, or even if it will limit further progression. It was important to me to focus on reframing this in a more positive perspective, taking the opportunity for reflection and growth. This really helped my recovery and ultimately resulted in me adopting a strength and condition programme as a central part of my sport”.

He had bright spots in 2014, with his first semi-final appearance at the ECA European Championship, Slovakia, and later securing his place in the Hurley Classic super final against a world class field. He took the British Champion Title at the same event with a solid ride, throwing down air tricks and finding his flow, giving him a noticeable boost in confidence. In 2015 Gav finished a close 2nd in the British Championships, and 21st in the ICF World Championships. Still not sure about what direction to take his competitive freestyle he said, “He knew his freestyle was among the best, and his passion for the sport was not in doubt, he loved competing, it was more a matter of commitment.”

In 2017 he found the balance he was searching for; giving us the first taste of the spellbinding aerial, and quick linking rides that he’s become known for. One of only two athletes to surpass 3000 points during the men’s K1 preliminaries at the ICF Freestyle World Championships at San Juan, Argentina. Although ultimately finishing 6th, from that time on, many considered him a serious future ECA and ICF title contender.

It was evident he had raised the bar and found the consistence he desired; securing 5th place on the ICF World Cup tour and won his second British Champion Title in 2018. Continuing to build on his ranking with 13th place at the ECA European Championship, and securing 3rd place at the Hurley Classic.

Gav continued to build in 2019, finishing 8th at the ICF World Championships, Sort, Spain, and 1st place at the Hurley Classic. Not to mention throwing down an electrifying ride to finish first in the GB Team selections, setting a new ICF 2055 points world record. His impact on the international stage has fuelled the fire within the UK scene; adding momentum to it’s growing talent.  He will soon take his high-energy approach to the ECA European Championships, as he works towards securing his place for the 2021 ICF World Championship.