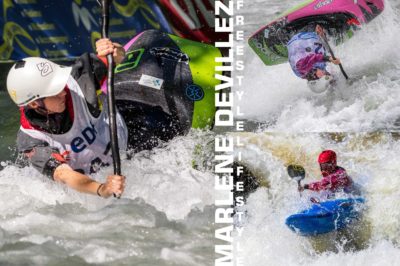 Marlène is a powerhouse in women’s freestyle. Taking an incredible 3 consecutive ECA European Championship Titles, including 11 French Championship titles since 2009; and her brand of freestyle is fast, determined, technically adept and fearless, which has everyone in anticipation of what’s next.

A firm believer in giving back to the sport she loves, Marlène coaches in Besançon and across France according to water levels. She is a member of the national commission, and since 2010 has organised a highly successful annual female freestyle course: with 25 female kayakers participating each year! “Personally, sport has really helped me and I’ve blossomed thanks to kayaking. I want to pass on what I’ve learned and certain values linked to the practice.”

With both parents as kayak instructors, Marlène has been kayaking since she was six. At age 15 she discovered freestyle and soon dedicated herself, body and soul, to the pursuit of waves and big air. So much so that in 2008 she was already working her way up the European Championship rankings placing 15th, and making her first ICF World Championship appearance the 2009, gaining 25th place.

Marlène’s total commitment to the sport and endless positivity soon saw her claim her first ECA European Champion title, and continuing to build on her valuable experiences, she was soon thrust back into the ICF World Championship looking to elevate her world ranking. She gained notoriety in the ICF World Championship 2011, with a spellbinding ride style, finishing in 9th place overall.

Her ride consistency showed through in 2012; successfully defending the ECA European Championship title. In 2013, her persona was as bright and optimistic as her rides, anchored in confidence, which took her to 11th place at the 2013 ICF World Championships at Nanthala, USA.

By now her trademark fast ride style was a glimpse of what ladies competitive freestyle would soon become. Her unique ability to control that speed and make every trick count earned her a third ECA Championship title in 2014 and 10th place at the 2015 ICF World Championships at Ottawa, Canada.

She unleashed a paradigm-shifting supply of power to the women’s field, securing her first ICF World Championship podium in Argentina 2017. “I trained a lot that year. I stopped my work for 8 months to devote myself entirely to training. I trained like I’d never trained before! I went to Chile to work on the big rivers and then to the United States, where I was able to compete against the world’s best on the circuit on the Colorado tour. And the results followed, as I won two out of three competitions”.

Marlène is now a dominant presence on International circuit. She returned to the podium at the 2019 ICF World Championships even stronger, narrowly missing the World Champion Title.

Marlene is an integral part of the ladies’ progressive freestyle movement, and now, after a second consecutive ICF Worlds Championship podium, she’s vying for a World Title and remains more determined than ever to showcase ladies freestyle.