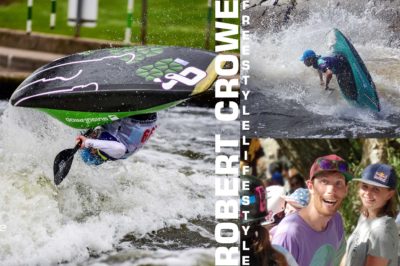 Rob’s firebrand of freestyle is technical, high-flying, quick linking and progressive. He’s consistently surprising and surprisingly consistent. Living up to every bit of the hype that surrounds him. With seemingly flawless rides, and at the peak of his game, he’s worked his way up the rankings to become one of the most electrifying freestylers on the international circuit.

Rob started competing in 2007, and having taken the British Championship title in 2012 and 2013, he made his international depute at the 2013 ICF World Championships in Nantahala, with an 18th Place. A true student of the sport, these where formative year for Rob. “I’ve blended the collective styles of my hero’s – the speed and snappiness of Ed Smith combined, the smoothness and style of Pringle; with the linking of Mathieu added after Natahala”.

He wasted no time, rising his way through the rankings with 13th place at the ECA European Championships, Bratislava in 2014, and was soon finding the ride consistency needed to be on the podium including 3rd place at the 2015 ECA European Cup, Plattling, and in 2016 there was a noticeable evolution in his performance. “There was a big month in the 2016 season. It started with a 6th place finish at the European Championships and for the first time feeling like I was on the brink of breaking into the top group of paddlers. I fully joined the party two weeks later, finishing 2nd at the Natural Games. The hard work and improvement I’d made in my competition preparation were starting to pay off”

The momentum built in 2016 season was now evident on the International circuit. Mind-blowing explosive rides in 2017, placed him 4th in the ICF world rankings at San Juan, Argentina. From that time on, many considered him a serious World Championship title contender. “It was a crazy experience. I went in hoping at best for a top ten finish, having missed almost all of the 2017 season through injury. Everything then just fell in to place and coming so close to a Worlds podium on my own terms added more fuel to the fire of pursuing a Worlds medal without compromising my style”

Rob continues to show his class and potential, consistently placing on the podium. Including Makinito, Hurley Classic and winning the 2018 Natural Games Title. However, caring for an injury and balancing a long recovery with competing on the circuits, was proving challenging. In 2019, the ICF World Championships in Sort, Spain, saw him thrown down some exceptional rides, but also take hits in the shallow feature during the semi-finals, and finding it hard to adapt his style to suit the shallowness of the feature. “Although disappointed with my performance in Sort, it provided motivation to improve in areas where I feel weaknesses were exposed which I may not otherwise have noticed. Hopefully making me a stronger more consistent competitor in the future”

Rob remains, at his core, a perfectionist, with an insatiable appetite for progression. While it’s taken him a few years to find balance between the aesthetic style he aspires to, and that which is sometimes needed to win titles, it didn’t take long for him to find his game. Rob started 2020 taking 2nd place at the highly contended Galway Festival, Ireland. Rob’s inner-fire runs deep, and there’s no doubt that he’s a 2021 world title contender.