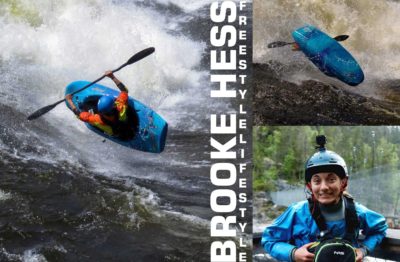 Brooke is part of a progressive group of female big wave freestylers at play on the biggest white water on earth. With a penchant for multi-stage events, mixing big wave freestyle and extreme river racing, Brooke is a rising phenomenon.

Brooke started 2017, her breakout year, at the Nile River Festival Uganda. Earning a second place with one of the biggest flashbacks seen. Then flying to colder climates to throw down epic rides and secure second place overall at Unleashed, a multi-stage competition in the massive cold waters of northern Quebec. The impressive results continued, earning the title of overall champion at Montreal’s Eau Vive big water competition.  Later that year Brooke represented the U.S. Freestyle Kayaking Team and placed 12th in the ICF Freestyle World Championships in San Juan, Argentina.

Her electric blend of aerial tricks and pure drive soon earned her global recognition, and she was featured in Teton Gravity Research’s “Breaking Through” series for her success breaking into big wave freestyle.

Brooke’s now seen as one of big wave freestyle’s great new talents; destined to be at the forefront of this movement. With a stellar start to her competitive career, solid backing from her peers and her undoubted talent, it seemed only a matter of time before Brooke took ladies freestyle to new levels. However, for the next few years success was curtailed – with 2018 and 2019 spent away from the competition scene; recuperating from a suspected waterborne bacterial infection. Brooke made the difficult decision to step out of the competition circuit and concentrate on her recovery; focusing on her river racing skills, and easing back into big wave riding.

It was soon evident this strategy worked, starting 2020 with the Kaituna Time Trial Championship where she tied for first place. Additionally, her helix and airscrew were voted both runner up and 3rd place in the Best Trick Freestyle category at the 2020 Whitewater Awards.

In 2019, Brooke teamed up with her long time mentor and friend, Natalie Anderson, to start a women’s-only elite freestyle coaching business on the massive waters of the Slave River and the Ottawa River. Brooke plans on continuing this coaching business in the coming years while simultaneously working towards her Masters in Science Journalism at University of Nevada Reno and continuing to pursue her goals in big wave freestyle.