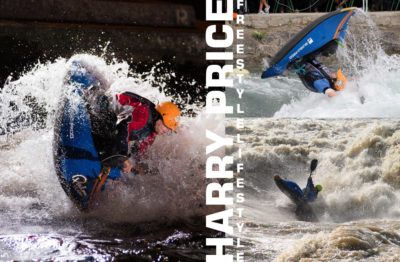 The mild-mannered prodigy from England continues to be an emerging talent to watch, rising to the top of the UK’s youth freestyle scene. Always understated, he’s been ripping waves or holes with a relaxed poise and calm assurance from an early age. Under that humble nature lies a gnarly competitor who prefers to let his rides do the talking, with an impressive ascent through his junior career, taking the 2017 British Junior Champion title in Nottingham as well as two consecutive Junior Hurley classic Titles (2016, 2018). Undoubtably 2018 was his breakout season seeing him secure an overall second place in the World Cups, third place in the ECA European Championships, and placing second in both the Natural Games and Makinito; all with an impressive level of constancy.

Harry navigated the pitfalls of early success with humility and style; delivering under the weight of high expectations. In 2019, after falling to 17th place at the ICF World Championships he bounced straight back, scoring 1890 points at selections for the ECA European championships 2020, and making the finals at the Galway Festival, Ireland. Once again showing his potential as a perennial title contender.

Harry remains, at his core, a performer first and foremost, with an insatiable appetite for progression, and while it’s taken him a few years to sync his style to the demands of the World Championships, today his love of the game is peaking. The process of pushing himself as a competitor, artist, and innovator is what drives him.

Going forward, he hopes to help more young people discover what following your dreams and hard work within sport can give you. He talks fondly of the 2012 Youth Freestyle series, which lit the spark for his freestyle passion, where he got to paddle with kayaking legends such as Bren Orton and James Benns. Harry aims to ensure the freestyle community stays welcoming and accessible, just like it was for him when he started.

In August 2019 Harry answered his calling for big wave events by winning the Slave River Festival Boater Cross and obtaining 2nd place in the Extreme slalom. Showing the ability to translate his skills from the ECA/ICF wave competitive arena, to take on some of the world biggest waves. Further nurturing his skills with the big waves of Canadas Northwest territories; giving him the breadth of river knowledge needed to pursue his dreams.