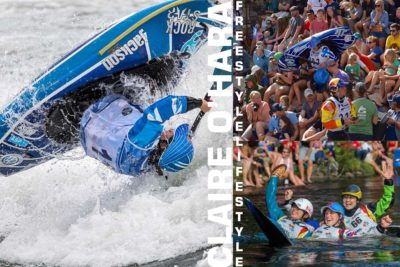 Claire is the greatest female freestyle athlete of all time. Her accomplishments precede her; eight ICF World Championship titles and the highest scoring ICF World Champion in women’s history. Since arriving on the international scene in 2004, she soon ushered in a new era of high-performance freestyle, pioneering ladies freestyle K1 and SQRT with a progressive, no-holds-barred style. This provided the basis for an electrifying ascent through the world rankings to become the first female athlete ever to ‘win the double’ securing two world titles in the same day at the Plattling 2011 ICF World Freestyle Kayak Championships and repeating this amazing feat again in North Carolina, USA, during the 2013 ICF World Championship.

In 2015, Claire had another incredible season heading into the ICF World Championships in Ottawa, Canada. Literally the best venue in the world for SQRT, guaranteed to be an amazing spectacle. In an incredible day of competition Claire smashed the current world record, setting a new personal best and still undefeated high score, to take her 4th consecutive squirt world title. The pressure wasn’t off and a few days later she was back on the water in the freestyle finals. This was a very different style of paddling, wave vs hole. She had been training and preparing hard on waves and made huge improvements hitting every move on the score sheet during training for over two years, but in the end she battled to adapt to the style of feature, finishing a highly respected third, a position she was extremely happy with in her first wave World Championship.

“I learnt a lot by not winning. I had been out paddled and that was great I was very proud to bring home the bronze medal. It didn’t matter that it wasn’t gold it had been just as hard to earn.”

Hungry to demonstrate just how far women’s freestyle has come, Claire’s 2017 season was explosive; making history again, with her ‘third – double’ ICF World Champion Titles (K1 and SQRT) and breaking another world record for the highest score in ICF competitions.

In 2019, Claire brought her 7 month old daughter Sky to the World’s – making her debut appearance in the freestyle community. Even though not at peak fitness, Claire propelled her way into the ICF World Title race, finishing in 7th; just missing a spot in the finals. Being a new parent while competing at the top of the freestyle game is impressive, with Claire saying; “I learnt so much about myself mentally and physically through the process and although I was still very much recovering it was so enjoyable to be able to go out there and throw down again on the world stage.”

In between training and competitions Claire makes time to help run and organise events, develop educational resources and coaching tools and coach paddlers of all ages and abilities around the world. Her continued contributions as a coach, to the development of freestyle has unarguable reshaped the ladies freestyle landscape for future generations.

Over the years Claire’s many accomplishments have earned her numerous honours, nominations and awards as well as substantial media coverage around the world. She been named the Leeds Sports Woman of the Year four times, won a prestigious World Paddle Award and been presented with five British Canoeing Athlete Recognition Awards.

Claire was named the Yorkshire Sports Women of the Year 2016 and invited to become a member of the World Paddle Awards Academy, an exclusive body of sporting legends and figureheads within paddle sport, a prestigious achievement and a recognition of her contributions to the sport. In 2017 she was selected for the ICF Athletes Committee.

In 2019 Claire received an MBE from the Queen in the Queens New Year’s Honours List. The MBE, Most Excellent Order of the British Empire, a British order of chivalry awarded for outstanding achievement / impact in an area of work, was in recognition of her exceptional ‘services to canoeing’.

When asked about whether she would be competing in 2021 she replied; “Definitely. My journey as a competitive elite level athlete is nowhere near finished, there is so much more I would like to achieve in the sport. In 2021 we have the Nottingham World Championships and I can’t wait to compete on home turf. Once again my Worlds training and lead up is not going to be ideal as we currently have our second baby on the way. With the little one due in October I will have approx. 8 months this time to prepare. I feel I have a much better understanding of how to approach the recovery and look forward to giving it a really good go again next year.”