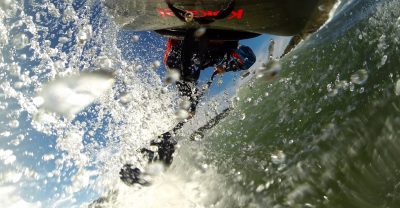 After a recent post about my new local beach break, I received a message asking if I could provide some useful tips on surf strategies for freestyle… the ocean provides huge potential for refining your  wave and down river big air tricks, and although freestyle kayaks lack the speed of surf kayaks, the way we approach riding ocean waves is very similar.

Before we start here’s a few tips to help your skill progression. Firstly, If you’re new to surf, start with small surf and progressive build in size as you gain confidence – 3ft surf would support most freestyle moves. Always surf with friends, this way you can be safe and analyse each other’s runs. As far as the tricks go my advice would be to enjoy the ride and don’t become predictable, vary your moves (left and right) don’t hold back…better to throw the move than not at all…with that in mind lets start with the fundamentals.

Lets take a quick look at the terminology used for waves (see diagrams below); the peak is the highest point of the wave just before it breaks, the curl is where the wave has broken and gets pitched out in front of the wave face. The point where the pile meets the green is the steepest and fastest part of the wave. Where a wave hollows it’s possible to surf under the curl inside the tube this is known as the “green room”. The lip is the highest point on the wave face that is just about to break, and is used to perform off-the-lip manoeuvres whilst on the wave or paddling out through the break. Finally the shoulder is where the break meets the wave face. It provides us with future water to manoeuvre and throw tricks as the break chases us down the line.

The hardest part of selecting waves is learning how to read them.  Waves can be surfed from the moment they begin to “Peak”.  If you catch it too early the wave will pass underneath you, if taken too late the kayak will get pitched out with the lip.  Wave selection is the art of anticipating how the wave will form and break down the line. Mastering this will allow you to generate space and time to perform big air tricks ‘til your heart’s content.

The best place to start this process is from the beach. Take a moment to warm-up and watch the horizon for incoming waves, look for where the waves start to break along their length first, then identify sections that are hollower and therefore faster and the sections that are flat and full making them slower. Look for certain characteristics within the wave, for example areas that may break early or form in a way that certain manoeuvres/tricks may be suited too. It’s also a good idea to pick where you need to end your ride, as this will make paddling out a lot easier rather than being caught inside the break.

Once you have an idea where the best waves are, it’s time to hit the surf. When you reach the line-up (area in which you catch your wave) take a few minutes to have quick look around at your surroundings. Identify landmarks that will help identify any wind or tide drift and help maintain your position on the break line; this will also give you time to re-focus yourself for the ride especially after a hard paddle out.

I love the anticipation on the line-up, it’s all too easy just to catch any wave, but a great wave is worth the wait. As your chosen wave approaches try to anticipate how the wave will peak and break along its length.

An ideal wave should have a progressive left or right (this means the direction in which we will travel along the wave face). Anticipating this is the key to advanced surfing, take a look at (see diagram below) the wave horizon; there is a longer slope down to the right of the picture (surfers left). This will produce a ‘left’ giving you a longer ride.

When you have selected your wave start to adjust your position right/left of the peak, keep scanning your eyes across the waves length as it approaches, this gives you an idea of how the wave is going to break. Some waves loose their form and you may choose to wait for the next one.

As the wave forms during take-off (see diagram below) you have a split-second to assess what angle to drive your kayak down the wave face.

There are three classic take off options open to you:

Performing a bottom turn or a faded take-off, allows the wave face time to wall up down the line (along the wave face), this is particularly useful when performing big air tricks (or off-the-lip moves if you have a surf kayak) where you want the wave face to be more vertical. As you feel the sensation of being carried forward during take-off, look left and right to identify if the wave is clear of other surfers, then shift your focus down the line. Once on the wave face it’s vital, in order to perform advanced tricks, that you surf in the most critical part of the wave called the pocket (see diagram below) If we surf too far out on the shoulder the kayak will become slow and sluggish. The idea is to stay in the pocket as much as possible, surfing deep with commitment pumping the rail to keep the kayak responsive in between tricks/manoeuvres.

This takes practice but is worth every second of effort, as more advanced tricks need quick bursts of speed. It’s equally as important to look for future water. Firstly, to quickly assess how the wave is forming ahead and secondly, to pick an imaginary point upon the wave to execute the chosen trick/manoeuvre. This skill is gained through experience and should be practiced to master longer rides and multiple-tricks.

Finally, at some point whilst carving along the wave face you may encounter sections ahead with a wide level peak that will break simultaneously ending your ride, known as a ‘close-out’. If this section is relatively short like in (see diagram below) you’re in luck.

Firstly you need to anticipate how far down the wave the section will pitch, and then quickly decide whether or not to; (A) hop over the section as it breaks or (B) drop down around the sectioning wave (easier to perform in surf kayak). Going over the section enables you to re-position yourself quicker onto the wave face, while going around causes you to loose speed making it hard work to get back up into the power pocket.  Alternatively it may be possible to power across the sectioning area as it curls (C). If none of these are an option, carve over the lip and paddle back out, or run out straight towards the beach and get some hole tricks in for kicks…

Hope this helps, hopefully see you in the line-up 🙂

We recently delivered a British Canoeing DSM Level 1 for Freestyle during a BC Coaching Matters Event. Great to see so many coaches wanting to get actively involved in freestyle. It has so much to Read more…

Sweet river levels over the weekend for our AWE training course in Devon. Loads of fun exploring as many lines as possible on the Upper Dart and East Lyn…